“The society may have formed its codes through trial and errors, but that doesn’t guarantee its accuracy. Nor is it something worth blindly following. Therefore it might be the better choice to be open-minded, stand up and be willing to give someone the opportunity to prove themselves. And Lu Over The Wall is a film that builds upon this very line of thought.” (Animetropolis)

The story of Lu Over the Wall is quite frankly pretty generic and unoriginal. However, similar to how Edgar Wright’s entire filmography all seem to be revolve around an incredibly overused trope, they all put their own spin on them that make them all uniquely stand out from the rest. This can be seen in the likes of Baby Driver and heist movies, Shaun of the Dead and zombie flicks, as well as Hot Fuzz and buddy cop films. This is also the case of Masaaki Yuasa’s take on the classic trope of “hiding an alien race that everyone fears because they don’t understand it” that Steven Spielberg’s E.T. first started decades ago. This is a trope that has been attempted to replicate dozens of times but has failed on pretty much every attempt. Some examples of these failures include the following films: Water Horse, Dreamwork’s Home, Mimzy, Race to Witch Mountain, etc. Or at least this was until Yuasa’s Lu Over the Wall came out, and perfected the trope.

As for the story itself, it takes place in a village by the sea. And stars a boy named Kai, who happens to have a real knack for creating music. Little did he know that there was a myth about how mermaids exist in their village’s nearby bay, in addition to the fact of how these particular mermaids really really love music. The mermaid’s voices are said to resemble the likes of sirens, taking control of sailors minds which lead to their death by crashing their boat on rocks that lay on shore. Or at least, this is what the villagers want you to believe… they think that these mermaids are pure evil that kills innocent humans. In reality, this is the exact opposite, all they want to do is to save anyone who is in danger regardless if they are humans or dogs or fish. So logically, Kai ends up befriending a mermaid and all they want to do is to protect their safety before the villagers find out… and well, this doesn’t work out quite as well as they hoped.

My only major issue with the story would be the fact that the first half of the film is incredibly strong in terms of storytelling and funny moments, but is sadly followed by a second half that it isn’t anywhere near as strong due to it being set up for the conclusion that is quite frankly fairly generic due to it being reminiscent towards the ending of Princess Mononoke. Still, a satisfying ending nonetheless, just not as unique as I would hope for. 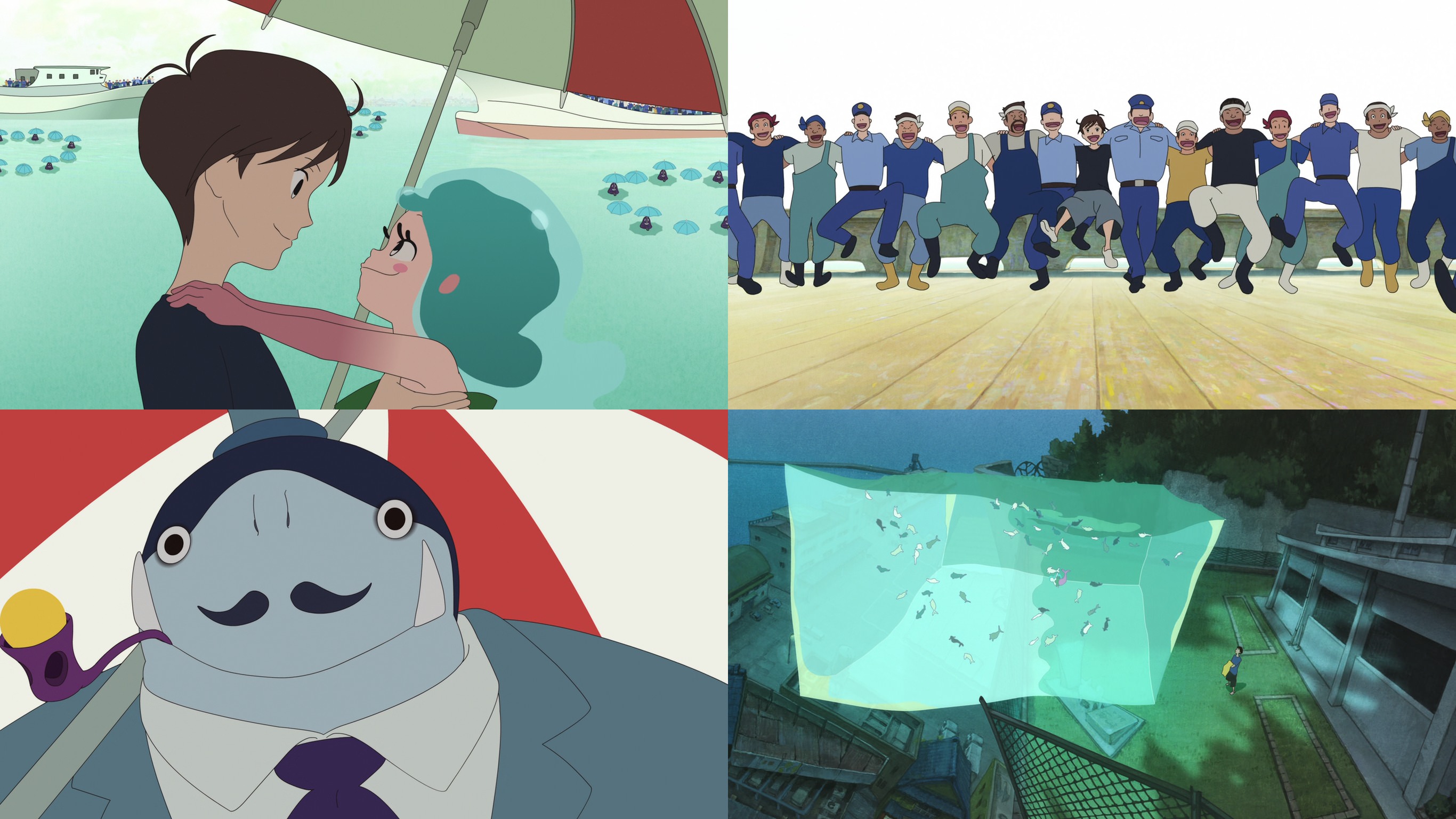 The characters in this film are not all fantastically well written, however, they are all distinctly memorable. One thing I do enjoy about the side characters is that they all have their own outlook on life, they aren’t robots that all talk act and think the same way. They all have a sort of mini-arc in the film, wherein which, you can see them grow in their own way.

Gunna be honest here, I’m not too sure how to discuss Kai Ashimoto. I find him to be a fairly generic main character that seems bright in terms of his use of creating music that can resemble the likes of Porter Robinson… yes, like the Porter Robinson that is responsible for the creation of 2016’s Shelter. I honestly feel like he’s really boring and unmemorable, but that may be the point that Yuasa was going for all along. A sense of normality in a world that is crazy, loud, and unpredictable. He kind of reminds me of the stand-in main character Hiro Hamada from Big Hero 6 in a way.

Lu. This girl is freaking adorable. She has the certain charm to her that always brings a smile to my face whenever she appears on screen, the last time a character was ever able to give me this much joy would be Rin from Usagi Drop (Review). Her voice is addicting, but I will expand on that comment in my music section of the review. Her actions and expressions in the film always surprise me, and I would like to give Yuasa major props for fleshing this character out enough to feel real rather than some stupid forgettable sidekick. But speaking of sidekicks… that fish dog is absolutely hilarious and worked perfectly as comedic a consistent source of comedy without getting to the point of it being irritating. I’d also like to mention, the introduction of Lu’s father in the film is absolutely priceless, and reminds me a bit of the comedic style of Charlie Chaplin. All in all, I believe that Lu’s smile is one that must be protected. 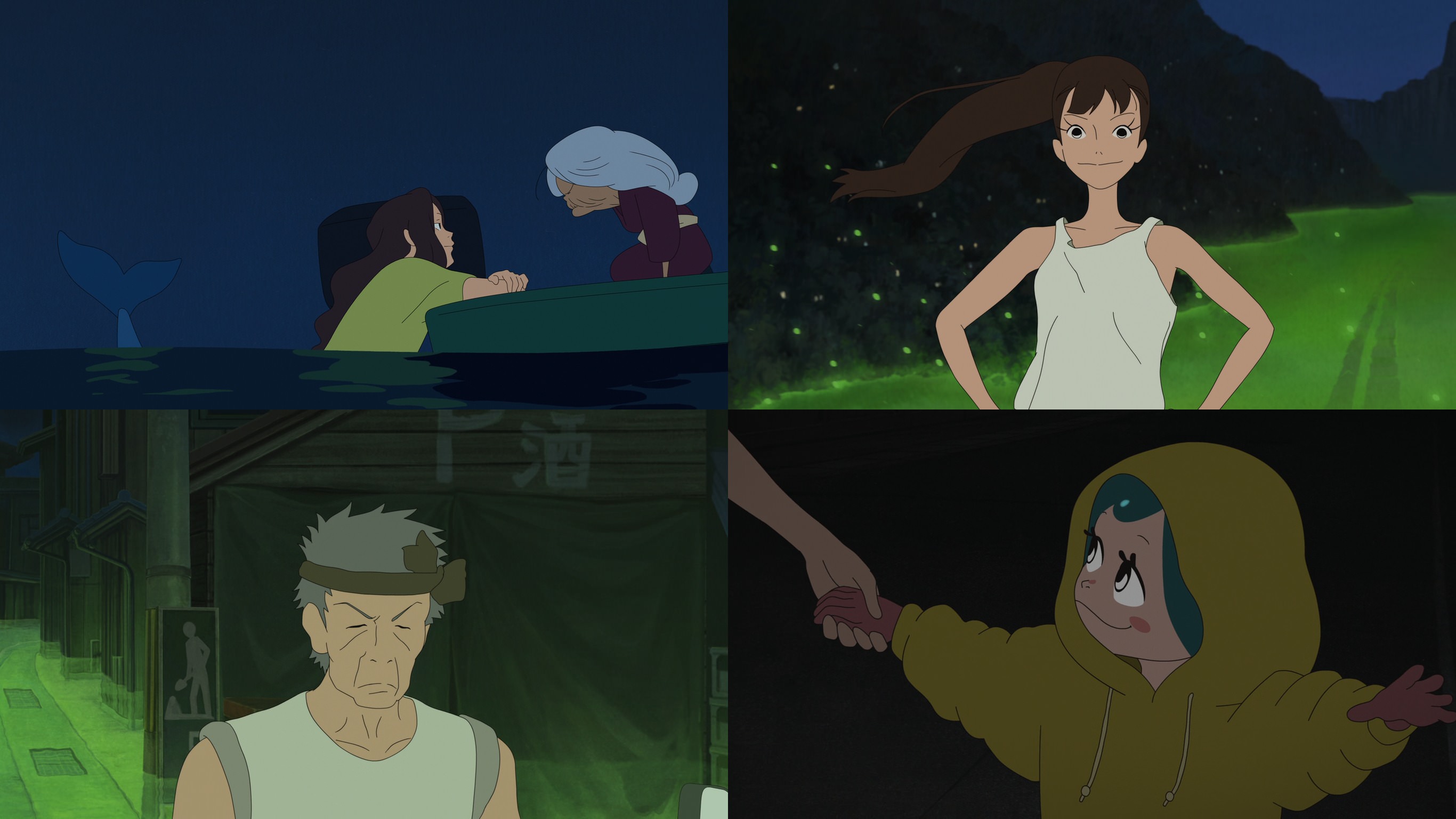 The music in this film is something that feels a bit mundane. Something that seems out of place, not authentic… but that is pretty much the point. There is a heavy focus on techno/electronic and GarageBand-like music that is periodically mixed with jazz as well as electric guitar. It’s weird, it’s fun, it’s infectious, and it works. But at other times it may be as simple as using just a guitar and keyboard to create a song that is smooth and free flowing, just like the water that is seen in the film and is just all around relaxing to listen too.

Can I just stop and acknowledge how freaking adorable Lu’s singing voice is? It is a fully decked out techno manipulated voice… it doesn’t really include any real words to it, but yet somehow it can get not only the characters and citizens in the show to get up and dance… this is also the case for anyone watching the film, including myself. The only problem is that it is a bit hard to describe without showing a clip to go along with it.

The film itself has a decently large focus on music. This is where Lu is willing to come out to shine. For some reason whenever music is playing Lu’s mermaid tail will ultimately end up turning into human legs, when the music stops Lu’s legs revert almost immediately back to a tail. Music plays a heavy role in helping drive the film’s story progressions, even to the point of leading to what I believe may be considered the climax of the film. However, since this review is non-spoiler I shall let you find out on your own as to how this may be the case.

I just wish that the OST was officially released so I could reference different tracks in the film to help write this section of my review, sadly it is not released to the public and the only way how to refer back it is by opening up the film in another tab and listen to in the background as I type this. My other minor problem with the music of this film would be the character’s voices… they just aren’t very easy to listen too. However, given the fact that this film isn’t primarily a music anime, I’ll give it a hesitant pass. 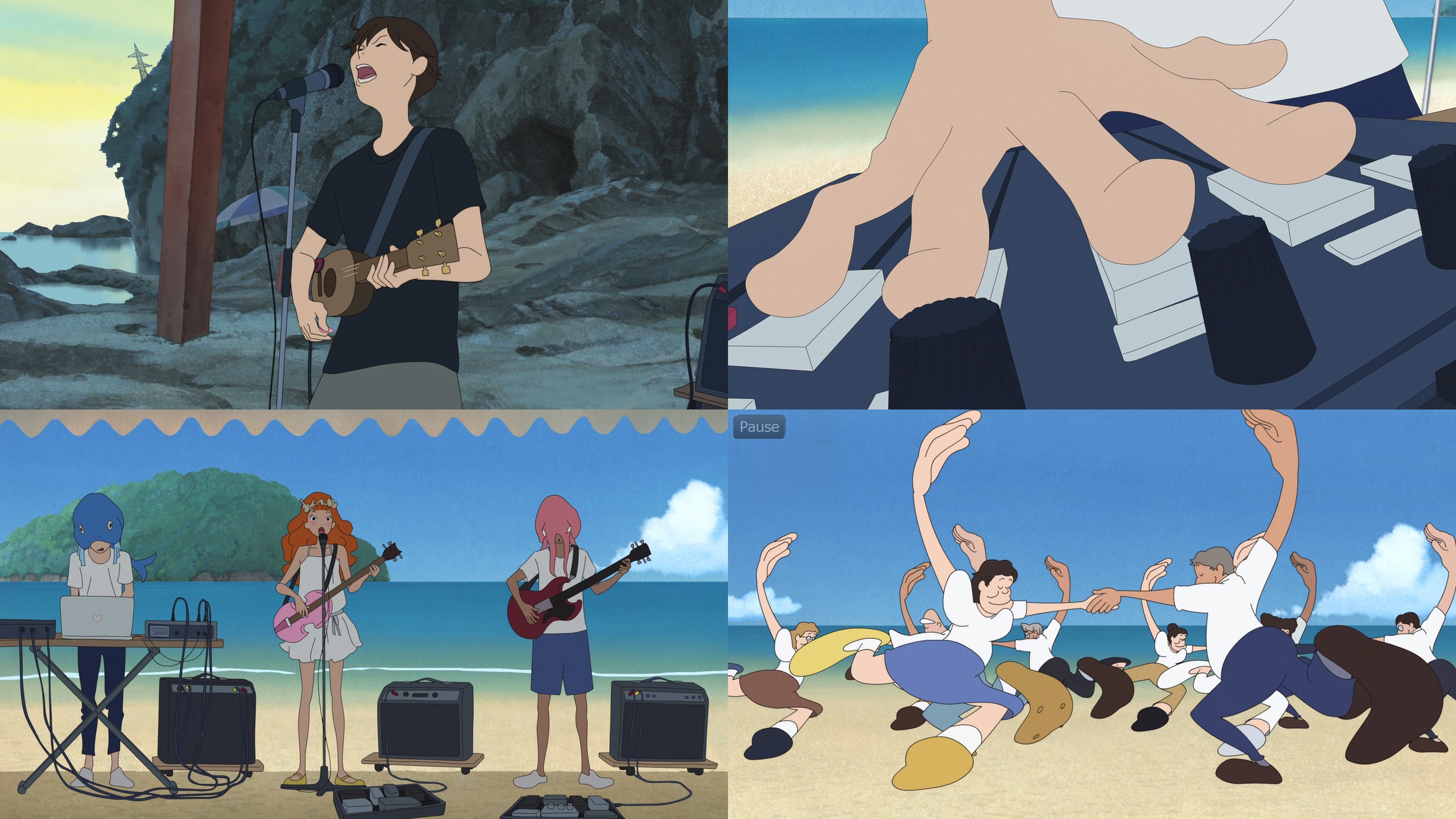 I mean what is there to say? The art & animation here is absolutely beautiful to look at. It’s not hyper-realistic like a Makoto Shinkai work, but it is hyper-stylistic with a unique color palette to boot. It is the type of art & character designs that allows for off-model animation techniques to be used almost all the time. The best way to explain the art style is that it is very similar to the likes that are used in anime such as Mob Psycho 100 and Pokemon Sun & Moon.

The character designs are all super unique and memorable. No character in this film looks similar to the next person, and this is actually quite surprising given the fact that this film has a gigantic cast. This art style can become useful when it comes to animating different character facial expression and can be seen at times as a use as subtle comedy. Might I also add that the dancing animation in this film reminds me of the likes of really old Disney, and is quite hilarious to watch.

As for the water? It doesn’t necessarily look like realistic water such as the water seen in Makoto Shinkai’s Garden of Words, however, it is free-flowing just like how natural water would work. Constantly moving in one way or another, whether it be by having waves crash on top of each other, or having it be almost still. The water is able to move wherever and however it wants, just like how real water moves. The film also does a great job showcasing the unique features that lay beneath the surface, showing hundreds of different sized aquatic life as well as a sunken ship or submarine. 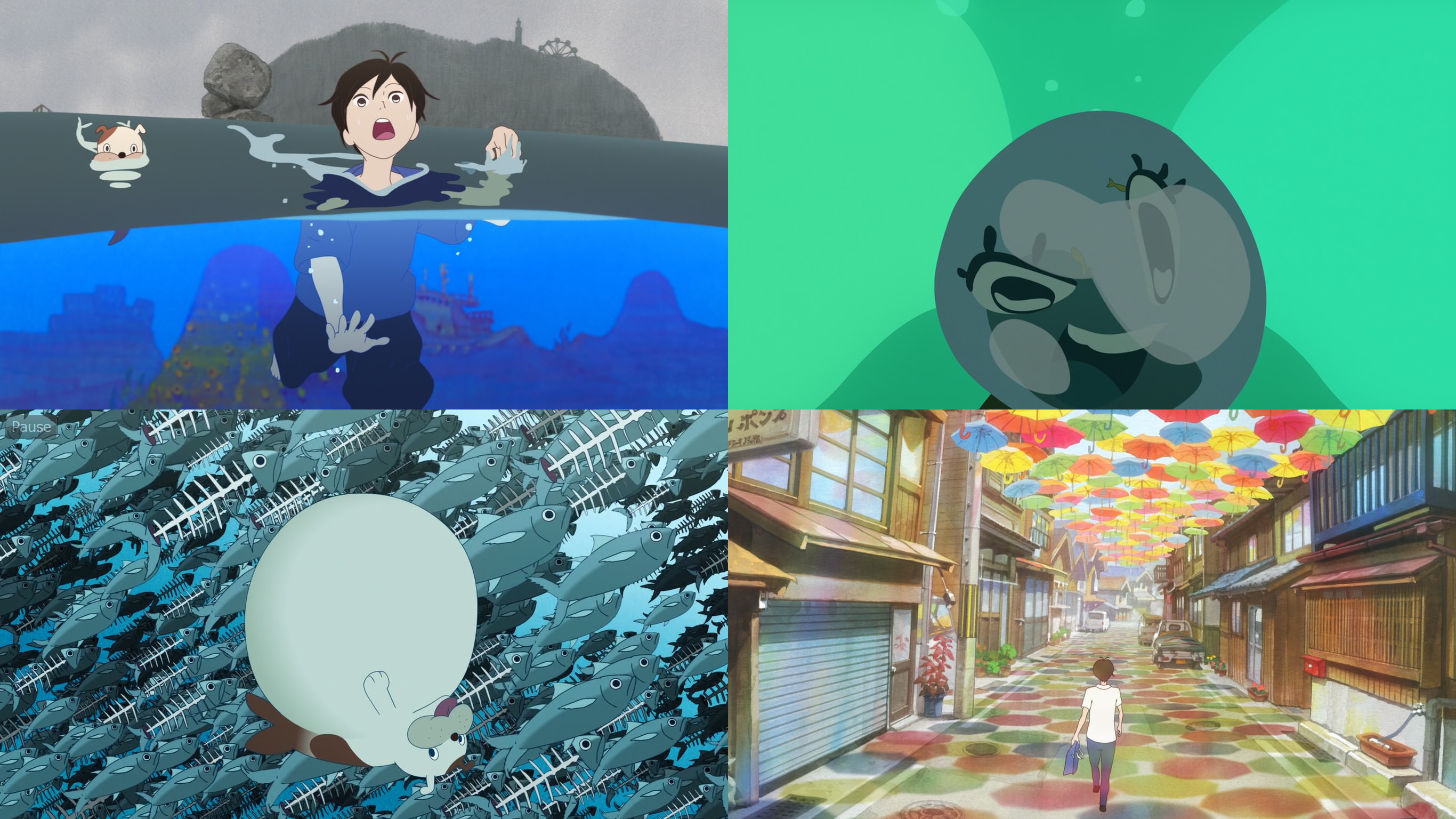 I went into this film expecting not a Yuasa film, but just a fun family film. This is exactly what I ended up getting. A Studio Ghibli or Mamoru Hosoda style film with a Yuasa flare to it. This is how I personally would recommend people going into this film to expect. If you do end up going in with this mindset, you very well may come out with the same opinion as myself and that is being in absolute love with the film from start to finish.

I highly recommend this film to all Yuasa fans who want to see the amount of range that he can provide, anywhere between arthouse projects such as Tatami Galaxy to sports in both Ping Pong the Animation & Kick-Heart to even family films just like Lu Over the Wall. There are projects like this one that makes me hopeful to see what he can do with the likes of Devilman Crybaby, which is slated for a Netflix Original release of January 2018.

Well… seeing as to how I haven’t made a post in months and a review in over a year. You can probably tell that it must have taken something that I am extremely passionate about to convince me to end up writing a new review after all this time. I would say my absence from blogging can be attributed to a lack of interest in writing, as well as college. Luckily for me, I am currently on Thanksgiving Break right now, so I have tons of time to waste.

Anyways, I have been waiting months for both this film and the other Yuasa film The Night is Short, Walk on Girl to both get translated into English. And this past weekend, the English subtitles for both films were released. So logically, I watched both during the same day. And since Lu Over the Wall is the film out of those two that I decided to write a review about, you could only assume that this is the film that I personally enjoyed watching more. I am proud to say that this is my second favorite anime of 2017, right behind the likes of Made in Abyss. In my honest opinion, this film deserves the rating of 8-9/10. I’d also like to mention that if I were ever a parent I would totally show this film to my children. It is a film that I believe can be enjoyed by someone of all ages. My one hope is that this film gets an English dubbing because that way the film can be shown to a much wider audience. 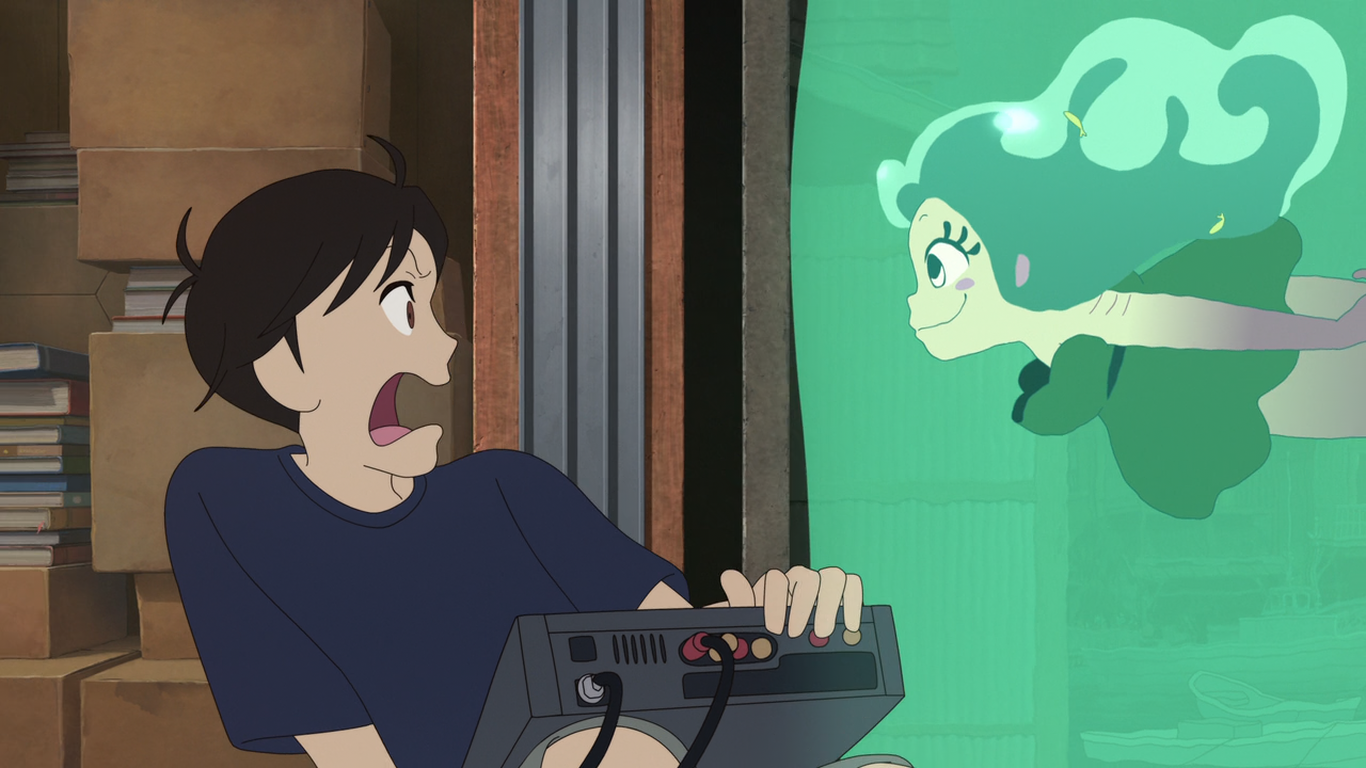 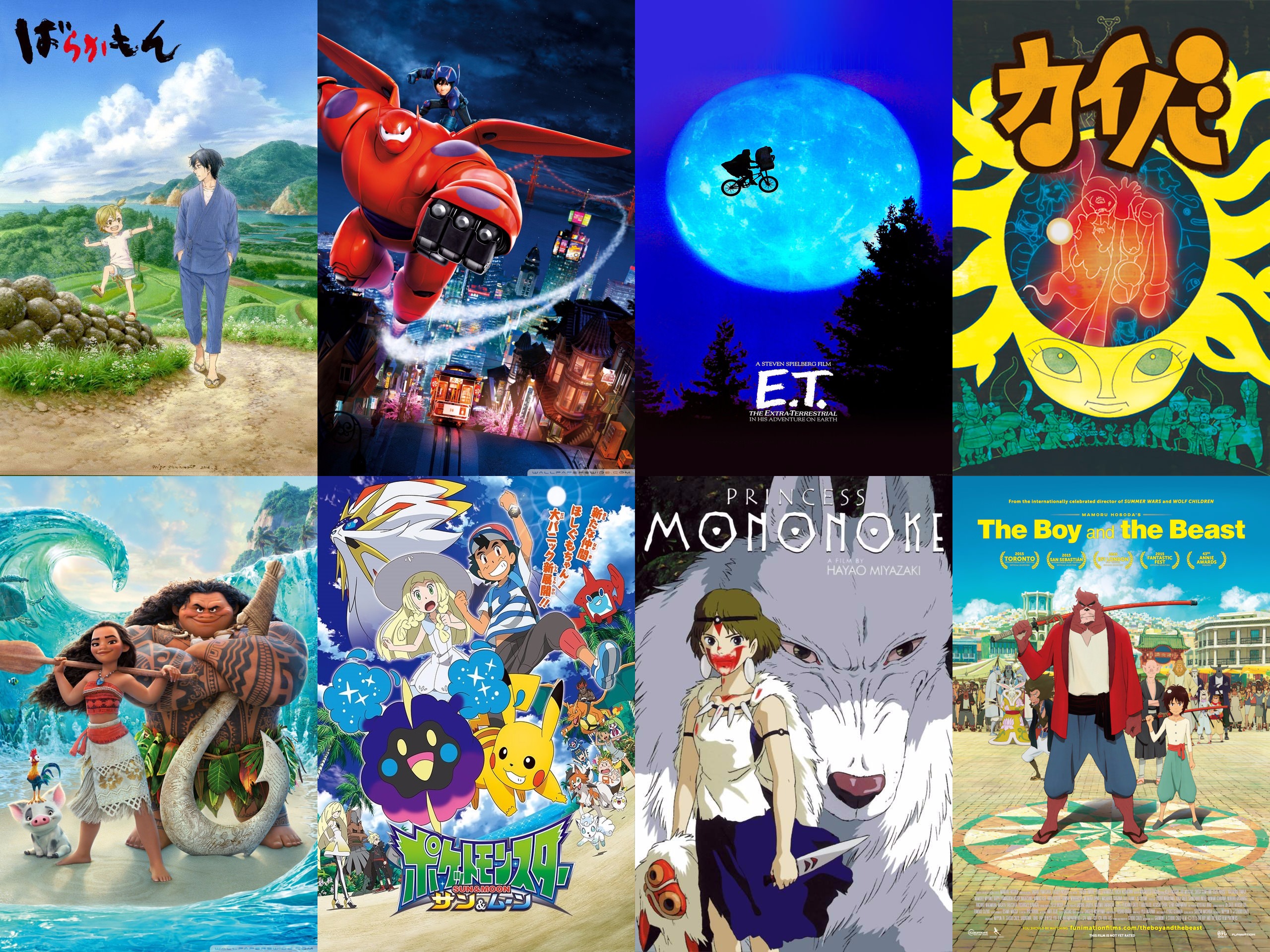 I’m really not making any promises, but Made in Abyss may potentially end up becoming my next review. 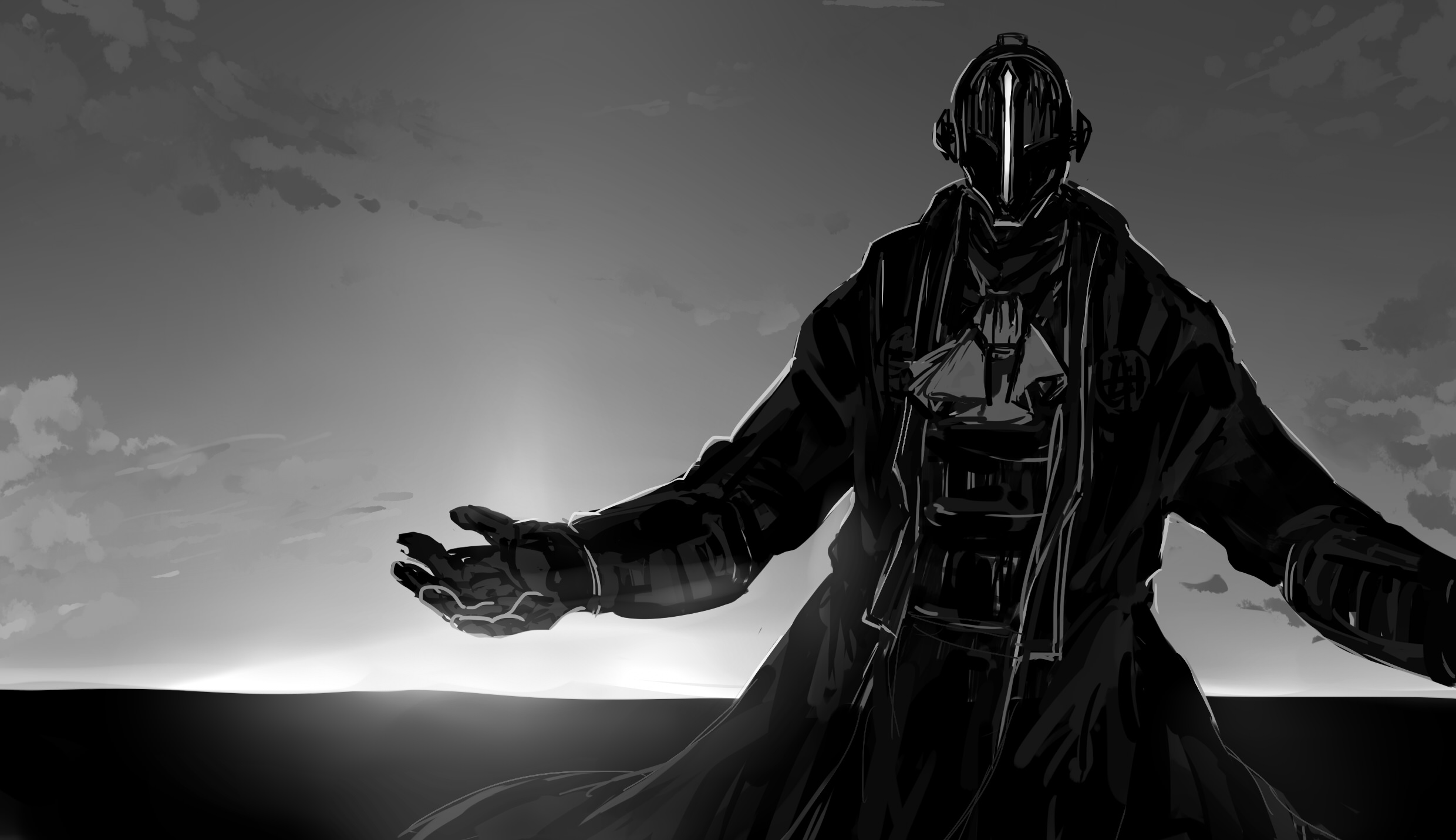